Spearman’s Coefficient of Rank Correlation (denoted by rho) is named after the British psychologist, Charles Edward Spearman. Rank correlation is a non-parametric variant of Karl Pearson’s Coefficient of Correlation. This means, while Pearson’s r requires an assumption of normality, Spearman’s rho does not require any such assumption. It achieves this by measuring the correlation between ranks of variables instead of the variables themselves. Since rho considers ranks, it can be used for ordinal, discrete, or continuous data.

Now, we already know that the Spearman’s Coefficient of Rank Correlation is calculated on ranks of variables. In Excel, there is no direct function to calculate Spearman’s rho. However, Excel allows us to calculate ranks, and then we can compute the correlation on the ranks to get rho.

We compute the average ranks in Excel using the =RANK.AVG(number, ref, [order]) function. In the arguments, the ‘number’ is the value to be ranked, the ‘ref’ is the set of all values within which the ranks are to be determined, and the ‘order’ specifies if the ranking is descending or ascending in order. Leaving order blank, or specifying 0 would result in descending rank where the highest value gets the smallest rank (such as, in the case of marks). Specifying 1 (or any other value) in order results in ascending rank ordering.

There is another =RANK(number, ref, [order]) function as well. The differences in the results of the two functions is basically about how they handle tied ranks. If two values are identical, =RANK() gives them the same rank, say 3, and the rank 4 is skipped. However, =RANK.AVG() takes an average of the two ranks (in this case, average of 3, and 4) and gives both values a rank of 3.5 each.

The table below shows the rice production and the rainfall data with average ranks calculated. The ranks are also plotted on a scatter. Once the ranks are available, computing the Spearman’s rho is simply a matter of using =CORREL(array1, array2) where the two arrays are those of the ranks. 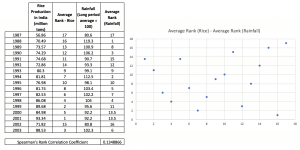 Expectedly, the Spearman’s rho between rice production and rainfall is a low value, indicating that rice production is not too inextricably linked with the vagaries of rainfall.

Let us see the Spearman’s rho between rice production and area under irrigation. 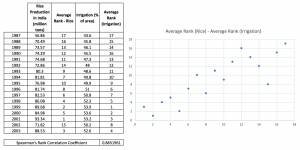 Again, the conclusions are in line with what we saw using the Pearson’s Coefficient of Correlation.

Measuring the Spread of Data

The Assumptions in Linear Correlations